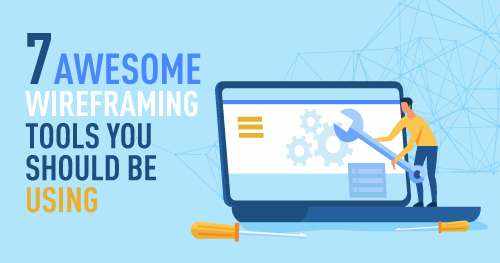 7 Awesome Wireframing Tools You Should Be Using

In the last decade, the importance of UI/ UX designing has increased significantly in the segment of websites, apps and mobile games mockup design and development. With so many new tools and techniques, we have gained a considerable amount of knowledge about UI/UX design process.

A website wireframe is essentially the skeletal mockup of a website design that exists before the final visual output. Today, there are endless options for the best wireframe tools in the market, each offering different functionalities. Website mockup designing or app mockup designing have been made fundamentally easier and convenient with these best wireframing tools available online. The best website or app wireframing tools visually strip the product down in order to reinforce the focus on user interactivity for better user experience.

The web wireframing tools also make the clients understand the process behind the proposed app or website mockup. We have carefully surfed through the masses of the wireframing tools online and compiled the best ones for you. Some of these are purely used for simple wireframe mockups while others can be used to create and design working prototypes as well. There are some really nice prototyping tools in the market available offline and online both. Out of these, some are free online wireframing tools whereas others don’t offer an open-source wireframing tool.

Come, let’s have a look at some of the best wireframing and prototyping tools for website and app mockup designing.

There are several more wireframing tools on the move like Photoshop CC, Whimsical and Omnigraffle to name a few. But a designer should always work on a wireframing tool which is best suited to his/ her taste. Also, thorough research before starting the designing process is highly recommended.