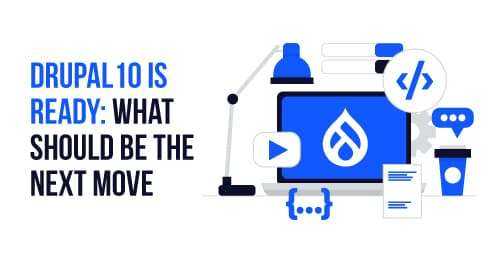 Drupal 10 Readiness Initiative | What Should Be Next Move

Drupal is highly successful in being the CMS of choice for several businesses. However, many of you must be bewildered by the proposed release of a new Drupal update within a short time. However, Drupal emphasises periodic improvements in the framework and various other strategic objectives. The upgraded version, Drupal 10, is expected to be released anytime during the summer of 2022. This article will discuss the Drupal 10 readiness initiative that businesses must consider.

The increased use of the internet has made businesses make changes to their business plans too. They are focusing more on their website and have made it the primary means to source new leads. Therefore, there was a need to have a robust framework that was secure and feature-rich. Drupal has helped several businesses by supporting the next generation features on their website.

The Drupal 10 release date could be June 2022, with a final fallback expected by December 2022.

The previous versions of Drupal will face the end of life, and official support for these versions will not be available. It means that developers will not receive the updates required to maintain the website's performance, security, and stability. Drupal 9 may see the end of life by the end of 2023.

When Drupal 10 goes live, it will be like the latest version of Drupal 9. But it will come with the updated dependencies and removal of the deprecations. So let us go through some of the upcoming features as per the Drupal 10 readiness initiative.

Drupal works with various third-party components, and it is essential to work with the updated versions of these products. Hence, the Drupal 10 websites will have the innovations for these components that will make the website more user-friendly and have better performance.

Symfony is among the main drivers of Drupal, and Symfony is facing the end of life by November 2022. As a result, the Symfony 5 compatibility issues are no longer present, and developers can use it with Drupal 10. The team is also looking forward to updating Symfony 6 too.

CKEditor 4 will be replaced by CKEditor 5 that will enable improved content editing. The support for CKEditor 4 is available till 2023.

You must remember that Drupal 10 works on PHP 8, and PHP 7 will end by November 2022. Moreover, Drupal 10 will not support Internet Explorer 11. There could be a final replacement of the jQuery UI with the modern JavaScript components.

By using Drupal 10, the site builders can find and install the modules from the admin dashboard. The addition of the feature will be to the Drupal core. But the feature is currently available as a contributed module and in the early stages of development. A "Try it now" button can allow developers to test the feature on a new Drupal installation.

It uses the Drupal Pod technology that can create a cloud-hosted Drupal development environment. You can browse projects from the Extend tab.

How would you feel as a developer if the website could update itself? Developers can have secure and smooth updates that come with Drupal 10. The update feature will get added to the core and is present for the Composer-based sites. The Automatic Updates Initiative has a few significant work areas, including UX enhancements, package signing for improved security, testing with various host providers, etc.

Drupal is now moving towards being a headless CMS. The Decoupled Menus Initiative is a big step in this direction. It can help to build some of the best means for JavaScript front-end to use Drupal website menus. It is available as a contributed module currently but will be included in the core later. One of the essential features that it brings is the support for permissions and authorization. The content creators can also update the menu through the Drupal UI without the developer’s involvement. The changes will be reflected in the JavaScript front-end automatically.

Developers were using the Classy theme for sub-theming requirements. There would be a new starter kit theme in Drupal 10. Now, front-end developers can have a starting point for the themes. It is essential to know that the starter kit changes will not directly influence the production themes. So, it will be easier to maintain. The introduction of the new tool will remove the support for Classy as it will be deprecated.

A new and modern Olivero theme will take accessibility to a whole new level. It will replace Bartik as the default front-end theme for websites. It can also be accessible for people with low vision. The content is easy to navigate, and the forms were well designed too. There are no issues with focus, contrast, or scaling.

What does the Drupal 10 Release Mean for Earlier Versions?

The backward compatibility feature between Drupal 10 and Drupal 9 ensures that upgrades will be easy. The upgrade to the new version will be easier than the upgrade after the release of Drupal 9. The tools needed for the Drupal 10 readiness will be like that for Drupal 9. The Drupal 10 readiness initiative has a to-do list that will help to keep the code updated. There will be an update on the core, and developers can use the Drupal 10 compatible versions of the contributed modules. You can fix the custom code for cleaning from deprecated components.

We will discuss some of the valuable modules. The Upgrade Status module allows the developers to fix the deprecated portions on the website. It has a user-friendly interface too. The Drupal Check module is at the base of the Upgrade Status module. Even if the website hasn't isn't deployed, the module can analyze the site's static code for deprecations. The PHPStan Drupal tool will require an advanced level. It is the static code analysis tool and is the core component of all upgrade tools.

The Upgrade Rector module runs the tool for developers who find it easier to work with the user interface. In addition, the Drupal Rector tool allows you to automate the process of the removal and replacement of the deprecated portions that you are aware of and needs cleaning.

Businesses are increasingly focusing on their website to increase conversions. Drupal is the framework of choice for complex websites. The framework is updated periodically to bring in new features that can help the website visitors and make it more intuitive with the latest features.

Businesses must know the important dates for the updates to the Drupal framework. It will help them stay abreast of the upgrades and ensure an on-time upgrade of the website. If you are looking to hire a Drupal developer to migrate to the upgraded version, contact us.