Not sure about moving to Drupal 9? You will be. | Blog | Innoraft Skip to main content 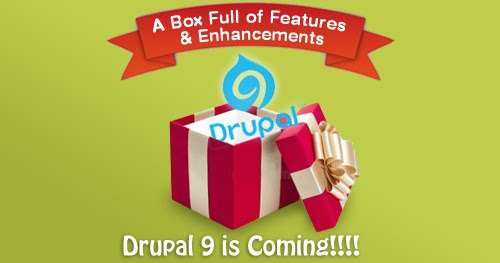 Not sure about moving to Drupal 9? You will be.

The Drupal community is growing and evolving globally. Everyone is pretty much acquainted with this rapidly growing open-source CMS platform for being an intense competitor to all the other opensource CMS. The Drupal community is sparing no effort to bring technology professionals a platform with powerful design and desegregation with third-party applications.

The buzz around the corner is all about the latest Drupal update i.e; Drupal 9. After the success and breakthrough of Drupal 8, the Drupal community has come up with Drupal 9. It is on the verge of getting a stable release. June 2020 is going to witness the release of the much-awaited Drupal 9.

Why should you upgrade to Drupal 9?

The Drupal community believes that the philosophy of technology is far from what it was before. All major releases of Drupal have seen a fair number of updates in the code and the architecture. And the migrations have not been very easy. This is the first time where there is no major architectural update and thus, the migration is expected to be very easy.

It is being launched by keeping in mind firmly the objective of modernizing the dependencies such as twigs and symphony to remove support of deprecated APIs, Drupal 9 is making its way into the Drupal community soon.

Let’s understand the significant reasons for the strategic release of Drupal 9:

New Features coming along with Drupal 9

How to plan for Drupal 9?

The catch in this entire practice of migration is to be sure that you cease to work with the deprecated codes. Following are some ways recommended:

With each information being revealed about the updates and features of Drupal 9 paves the way for us to gear up and encounter big leaps.

Should you wait to migrate from Drupal 6 and 7?

The owners who have already built their website on older Drupal versions are apparently questioning if it's worth it to move to Drupal 8 right now. The answer to this is a big Yes! A steady and working update track has been extended over the past few years. A website migrated to Drupal 8 can be easily migrated to the expected release – given, of course, that the code is written in conformity with new guidelines.

Drupal 9 is arriving soon  — entrust us with getting your website ready!

I would like to quote the words of Dries about Drupal 9 “The big deal about Drupal 9 is … that it should not be a big deal”. This is for those who are still reluctant and has a number of dilemmas upon migrating to Drupal 9. It is going to serve you right. D9 will confer better performance and security,  together with chopping out out-of-date peculiarities.

That said, I’m hoping that the above Drupal 9 to-do-list will prove useful to you. The to-do-list may appear to you a little spooky but in actuality, it’s not hard to attain them. Moreover, I think you should also check your projects for compatibility today so that on the 3rd of June 2020, you can enjoy your fresh and unproblematically renewed websites. Innoraft, being a renowned website development company maintains a team of highly experienced Drupal experts who can help you get your website a seamless transition and would incorporate all the advanced features Drupal offers and keep your website game strong! And the way we have defined our transitions, we are sure that it optimizes the cost massively.

Good luck with your upgrades. If you do not have a trusted partner for your Drupal migration yet, Innoraft will be happy to get on a call and help you out.

In the last few decades, the online merchandising sector has made strides at an unprecedented pace following that, the demand and emergence of many e-commerce platforms are on the rise.

Drupal is approaching with its next big evolution and the upcoming release that is none other than Drupal 9.

Points to check before choosing the right website development company

In today’s day and age, where the digital population is increasing exponentially, no credible business can or should refrain from having a strong and steady web presence.

If you're here, I assume you already have a website built on WordPress but you're not satisfied with it, or perhaps you're here to have a clear idea about why you should give a thought to migrating