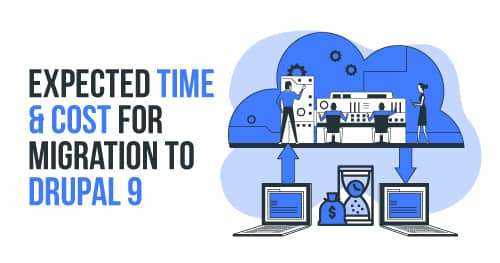 Drupal is among the standard Content Management Systems (CMS) used in designing more complex websites. It uses advanced features to aid the developers in designing beautiful websites. It is also known for frequent updates, and the recent update to Drupal 9 is necessary for the marketplace. However, businesses are worried about the approximate cost to migrate from Drupal 7 to Drupal 9. We will discuss this aspect along with various considerations for the migration project.

Why must you Migrate to Drupal 9?

End of life is around the corner

It would be best if you upgraded the CMS at regular intervals. It helps add new features to the website and offers several core modules for better user interfaces. Performance enhancements are another reason you should go for upgrades. Moreover, any security vulnerabilities in earlier versions are also plugged through the upgrades.

It is essential to note that Drupal 8 is reaching the end of its life in November 2021 and Drupal 7 reaching end of life in November 2022, and it is necessary to migrate the website to Drupal 9. Web admins will not receive support or fixes from the Drupal community after this timeline. There are more than 565,000 websites still on Drupal 7 and more than 267,000 on Drupal 8, and they must be migrated in the near future for the sites to receive security updates.

Reasons to Migrate to Drupal 9

There are other reasons for your benefit when you migrate to Drupal 9. The new Drupal version has led to improved performance of the website. Few web admins may be awaiting a stable version of the upgrade, but there are no severe changes in the features. We will discuss some of the new features in detail.

Software experts are stating that the Drupal 9 upgrade is easy and is like a breeze. Earlier, the upgrades implied a time-consuming process that led to huge costs. In addition, there were configuration changes and involved content migration and porting modules to allow them to function as needed. One of the key targets for the Drupal 9 release was to ensure easier upgrades in future.

Understandably, future Drupal releases could be such that upgrades would not need major migration activities.

There have been upgrades in the Symfony and Twig software too. As they also see an upgrade, migrating your Drupal website to the new version is necessary. Other dependencies are getting updated too.

Website migration projects can expectedly be time-consuming. First, the migration team must find out the projected issues in the process. The timeline can usually depend on the size of data on your website.

As with any other migration project, most web admins are worried about the time of Drupal 7 to Drupal 9 migration. The migration timeline will depend on the amount of data and content on the website. For example, it is estimated that a website without any customized modules and a few content types can be migrated within a few weeks. However, complex websites can take longer to migrate to Drupal 9.

The migration project involves migrating the content and the configuration to a new instance of the website. The content can cover various posts, files, blogs, and articles, etc. Therefore experts analyze and decide on the entire migration process.

It is essential to take note that the custom modules must be written according to Drupal 9. This activity can take much time during the entire process. However, several techniques can be automated, as there are several modules to help in migration. Manual recreation may be needed too. Some projects may need field mapping while importing the website data present in different formats.

When the data is migrated, the migration team must check for errors and ensure that the correct data has been entered in the fields. Once everything is in order, you can go live with the migrated website.

Cost of the Migration

You must bear in mind that any migration activity can be tedious. It is also difficult to judge the precise estimates of Drupal 7 to Drupal 9 migration. The cost associated with the migration will depend on the content and design of the website. It will also depend on the functionalities involved and the associated custom code.

The migration strategy can be created keeping in mind the website's content, the investments involved, and the timeline. It is very important to appropriately analyze the requirements in the migration process to minimize the risk of cost escalation. Once the various features and functionalities are listed out, the developer can start the migration activity.

As mentioned earlier, it is difficult to predict the time of Drupal 7 to Drupal 9 migration. Some of our quickest migrations for medium-sized websites took around 2.5 - 3 months. On the other hand, a website of high complexity took about 5 - 6 months.

The migration to Drupal 9 is easier once you have migrated to Drupal 8 already. Drupal 9 is mostly like the last minor Drupal 8 release - Drupal 8.9. There are no huge configuration modifications or content migration and requirement to port modules. The new Drupal 9 release was mostly built on Drupal 8 by removing the deprecated unwanted APIs and updating the dependencies.

It is necessary that you update the website to the latest version of Drupal 8. Drupal 8.8 is fully compatible with Drupal 9. Hence, it is suggested to update to at least Drupal 8.8 before the migration. Our Drupal migration experts have the right experience across diverse Drupal projects. We expect that a medium complexity website can be migrated from Drupal 8 to Drupal 9 within 1 month. A high complexity website could take around 2 - 2.5 months to migrate.

Considerations before the migration

You must finalize the features that you want on the new site. For example, do you wish to change the newsletters, forms, etc.? Also, it would help if you considered whether you want to make changes to the existing appearance of the website. The decision on migrating whole or part of the content must be taken as well.

Are the developers skilled enough to carry out the migration activities? If they are not, then they must undertake adequate training before setting out with the migration. In addition, they must know about the migration's dependencies and be aware of the core code in Drupal 9.

It is suggested that you understand the time of Drupal 7 to Drupal 9 migration. The timeline must also consider the resting of the new site and checking how the SEO of the new site is working.

Businesses must readily migrate their Drupal website to the latest version. The new version is laden with several valuable features. It is, however, difficult to assess the actual cost of the Drupal 7 to Drupal 9 migration. It depends on the size of the website and the content and features you wish to migrate.

We have undertaken several projects covering Drupal 8 to Drupal 9 migration within 200 hours. So if you are willing to migrate your website to Drupal 9, we are just a phone call away.

As the behaviour of the audience continues to change, businesses need to ensure they tweak their strategies to address this.

What is the Importance of Responsive Web Design for Business Growth

The key to the success of your business arrives when your website meets the requirements of the customers.

The use of Apple devices has been increasing, which requires developers to consider mobile app development on iOS too.

PHP has been a popular language to script various websites that have helped companies enhance their conversions.