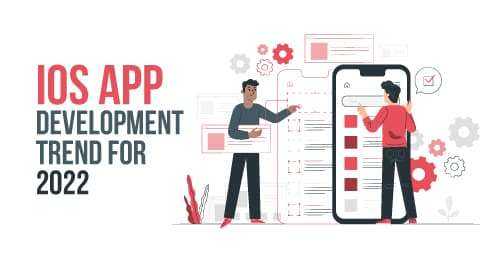 The use of mobile apps has increased as brands continue to try and increase mindshare among their audience. As the users use their handheld devices for a long time during the day, it allows businesses to increase engagement and ensure loyal customers. Companies must try and benefit from next-generation technologies while also ensuring that the app is secure and performs optimally.

Since its advent in 2019, Swift has rapidly gained the confidence of app developers. It has a faster launch time and has API stability that helps to provide better performance. A modern compiler version makes it easier to upgrade from version 4 at a more manageable pace. There are several beneficial features for developers, like ABI stability, Integer Multiples, compact dictionaries, etc.

Swift is an open-source platform that is faster than Objective-C. As an evolving iOS app development trend, Swift will have several advanced technological changes and a new diagnostic engine. In addition, developers can create APIs and designs, while the protocol extensions make writing code easier.

The use of the latest technologies in mobile apps is increasing at a brisk pace. With mobile apps integrating significantly with users' lives, various brands also include the AR/ VR feature in their apps. It increases user loyalty and allows them to experience simulated environments. In addition, they can understand the multiple uses of the app better.

As time passes, this technology has found its way into apps catering to different audiences. This technology is being used in newer fields as brands are constantly trying to improve user experience. It can help to enhance consciousness, data retrieval, etc.

There can also be Siri-powered features that can ensure correct responses. Next-generation iOS mobile applications can have speech recognition features to understand what the user speaks and transcribe it into text. It can also provide industry-specific apps and use the algorithms to cater to specific business requirements.

Blockchain has found its use in several industries and helps in decentralised encryption of sensitive information. The sectors that are known to store a high volume of critical data can use this technology. It will help to enhance the secure">security of the app and ensure data integrity. Transactions will be more secure, and financial companies can use this technology for added security.

Apple has introduced a technology that can create and verify timestamps. It will help to add another layer of security to mobile apps. It will help the ecosystem root out any malicious portions in the network and provide a more secure environment to app users.

Increased Use of Chatbots

As brands continue to enhance their user interactions, mobile app development increasingly uses chatbots. It is another unique feature that uses Artificial Intelligence technology. It acts as the first line of interaction that the mobile app can have with the user. A robust chatbot feature can improve user satisfaction levels too.

It acts like an assistant that can readily fetch the information that the user needs. They can quickly address any customer issues, and the user feels that the brand's support is available 24X7. It can save effort, which is another reason for its widespread use.

Mobile app users prefer to search the locations of the nearest outlets on their mobiles. The beacon technology helps to enhance location-based search. The beacon helps determine the site within a limited area and acts as a relay tower, which helps communicate. iBeacon is the protocol developed by Apple.

The iBeacon technology is an emerging iOS app development trend. It allows handheld devices to trigger specific actions when they are near the iBeacon device. It uses Bluetooth technology and helps to track the location of the user's device accurately. It is used in various iOS apps as brands prefer to send targeted messages to their audience.

Increased use of Wearables and IoT

The advent of the latest technologies has also led to enhanced usage of wearables and IoT devices. iOS developers must consider these features that they can include in the mobile app. The focus is on integrating the iOS mobile apps with internet-enabled devices for specific business uses.

Apple is known to be the forebearer of wearable technology. The HomeKit framework helps users to connect with the various accessories in their homes over the mobile app. Developers can readily use iOS-based mobile apps to interface with the wearables. The apps can quickly interface with the devices and exchange critical information for their users.

The increased incidents of hacking by cybercriminals requires app developers to include next-generation security features on mobile apps. Apple has introduced an enterprise access control mechanism that allows users to operate in a secure ecosystem. In addition, as businesses continue to ensure data security, the App Transport Security feature enforces secure connectivity.

iOS apps are required to connect over a secure HTTPS connection using the TLS v1.2 protocol. Apple has a few keys that will help you to pinpoint the exceptions for inclusion. Troubleshooting is easier too, and developers can readily check the security features too.

The use of cloud technology is increasing manifold. It provides a secure, centralised repository that makes it more cost-effective for businesses. Mobile applications on iOS are also using the technology. It can help store documents and backup essential files while also allowing a cheaper backup of the data on the mobile app.

The use of the cloud allows mobile apps to store a large volume of information and expands the variety of benefits that might be there for the app. It will ensure that users do not have to keep the app data locally on their handheld devices. It is a critical iOS app development trend that allows improved scalability for the mobile app. Be in touch with a reputed iOS app development company to design such an application.

Use of Apple Pay

The use of online payments has increased drastically. Mobile commerce is the order of the day, and mobile apps must integrate with several payment modes. It is easier to integrate with Apple Pay. It is known for its security features, convenience, and one-click payment features.
It is among the growing payment gateways and allows payments using the NFC features embedded in the devices. It does not require saving the card details either. It can help to deliver funds faster to merchants than traditional methods. It has had a phenomenal jump in the number of users.

As businesses increase their audience outreach, they are taking the mobile app route to enhance outreach. Moreover, they must also incorporate the newer technologies that will help them to improve user experience and ensure data integrity.

Developers are also increasingly developing apps on iOS to reach out to Apple users. It is a robust platform and allows the incorporation of the latest technologies. Are you looking for experts on iOS app development services? You can reach out to our experts. We would be happy to help!