Why is Drupal 9 going to be an easy upgrade compared to the previous major versions? | Blog | Innoraft Skip to main content 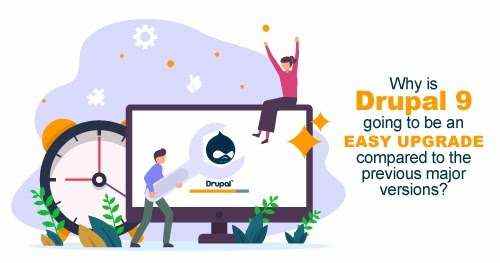 Why is Drupal 9 going to be an easy upgrade compared to the previous major versions?

Lately, there has been a lot of buzz around the corner about Drupal 9. The Drupal community is launching Drupal 9, and as well as have plans for the EOL of Drupal 7 and Drupal 8 by 2021. With every announcement of a fresh major version of Drupal, there always is stress about how challenging the upgrading process will be. With Drupal 9, there are literally zero reasons to be concerned.

In the past, each new major version of Drupal was marked as a break from the last major version. The Drupal community did not ensure adaptability among the new major version and the old major versions. This had some upsides but produced significant disruption because of the compatibility issues, upgrading was not an effortless process.

What’s special about D9 & why is it considered easy?

As we know D9 is going to be the major upgrade from D8 but what makes it special is that it will be functionally equivalent to the final minor version of D8. Basically, D9 is the cleaned-up version of D8.

When D8 came into the picture, it came with new innovation model where minor releases occurred semi-yearly. This surged the number of characteristics being added to Drupal. Because of these newly added characteristics, numerous different ways to solve problems are being implemented and some of the code is now deprecated. Now, this deprecated code is for backward compatibility and here D9 is going play a key role by providing the chance to remove this code and anything and everything which is not required anymore. It essentially means that we are not just removing any errors but also warnings. And that makes the code and its structure a lot cleaner than before.

Third-party dependency is the other specialty of D9. Website development companies associated with Drupal are certainly aware of the fact that Drupal integrates with common PHP projects like always written as Symphony and always written as Twigs and, adheres to the vendor support lifecycles for these projects. With the release of Drupal 9, we’ll have advanced and supported versions of software that will be around for a prolonged time period such as Twig 2 and Symfony 4/5. This essentially means that your Drupal 9 site will have a bigger Long Term Support (LTS).

As stated by  Drupal.org D9 docs:

"Drupal 9 will be a cleaned-up version of Drupal 8. It will be the same as the last Drupal 8 minor version with our own deprecated code removed and third-party dependencies updated."

How to prepare for Drupal 9?

As I’ve already mentioned above and in my previous article that Drupal 9 will not have radical changes. It is going to be the latest version of Drupal 8 with zero deprecated codes and upgraded third party integrations.

The other simple ways to prepare for Drupal 9 are:

With each passing day, Drupal is just getting better! There were functions in the previous versions which we have utilized and put to use for a good span of time. But now, these functions will not be suitably fitted in the new release. Drupal 9 is going to be a new thing yet it won’t be a complicated thing. For sure! In a nutshell, the key to achieve an entire transition to Drupal 9 is by keeping up-to-date with Drupal 8.

That said if you have any questions about how to build a roadmap or a full-fledged strategy for a well-to-do transition of your current site to Drupal 9, Innoraft is at your service and here to help. Drop us a line and we will respond to your concerns immediately.

Why and How Innoraft became an ISO 27001 certified organization

Why and How Innoraft became an ISO 9001 certified organization

What is ISO 9001 certification?