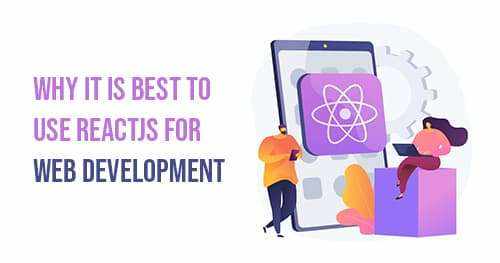 Front-end and frameworks are inevitable and essential parts of web development. As the technologies improve day by day, many new frameworks and libraries are coming to get better results. ReactJS is one of those front-end web development frameworks used by more than 10 million websites.

Let's start with a quick introduction to ReactJS to understand its existence of ReactJS.

In the year 2013, Facebook made ReactJS open-sourced. However, in the beginning, the developer's community did not approve it because it used Markup and JavaScript in a single file.

But with experience, many started accepting the component-centric approach for separating concerns. So now, it has become the most lovable framework of the developer's community.

In the year 2015, Facebook introduced React Native too. It is a library that allows us to create native Android and iOS using ReactJS.

In 2016, with version 15, ReactJS started using Semantic Versioning. This semantic version also helped convey to the developer's community that React was more stable than other frameworks.

The latest survey by Stack Overflow also revealed that React is the most loved web framework, while Angular ranked 9th on the same list. 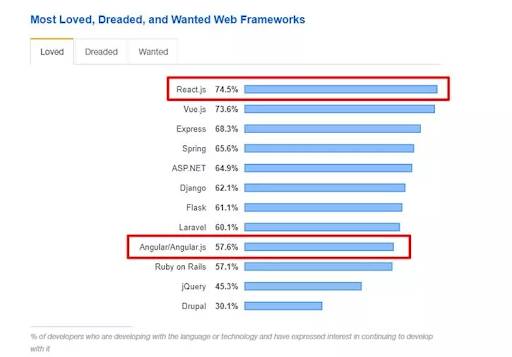 At present, over 220,000 live websites are using React. Not only that, but industry giants like Apple, Netflix, PayPal, and many others have also already started using ReactJS in their software productions.

Why choose ReactJS for web development?

Let's read some of the points which could prove why it is beneficial to use ReactJS for web development:

It's Easy to Learn

React is a comparatively more straightforward framework than other popular frameworks like Angular & Vue. Maybe this is one of the main reasons ReactJS gained so much popularity in less time. It helps businesses to establish their projects with ease quickly.

The more complex the technology or the framework, the more time it will take for the developers to start the development project. And as you know, it is human nature for all human beings to avoid difficult things.

Since ReactJS is considered the most straightforward framework that is easy to learn and grab, many startups and big businesses are seen adopting and inclined toward it.

React is remarkably known for its flexibility. You need to learn it once, and after that, you can use it on several platforms for building high-quality user interfaces. React is a library, not a framework; its library approach makes it a fantastic tool.

React was introduced with the specific purpose of creating components for web applications. A React component can be anything in your web application like a Button, Text, Label, or Grid. But as React's popularity has grown, its ecosystem has also grown to cover various use cases.

React is also helpful in generating a static site with tools like Gatsby. You can use React or mobile app development. It is also beneficial in Desktop application development with tools like Electron, which can run on Mac and Windows with ReactJS technology.

React is also helpful in supporting server rendering of its components with tools like Next.js. Additionally, you can create a virtual reality website and 360 experiences using React VR.

React is incredibly popular not only among U.S. developers but all over the world. According to Stack Overflow analysis, it was the second most popular framework in 2020. The collateral advantage of this process is a fantastic community and the ecosystem it creates.

Talking about the popularity of ReactJs, I would like to say that React is highly popular among U.S. developers and worldwide. According to a study by Stack Overflow in 2020, it was the second most popular framework.

Here's the number of websites built on ReactJS effectively: 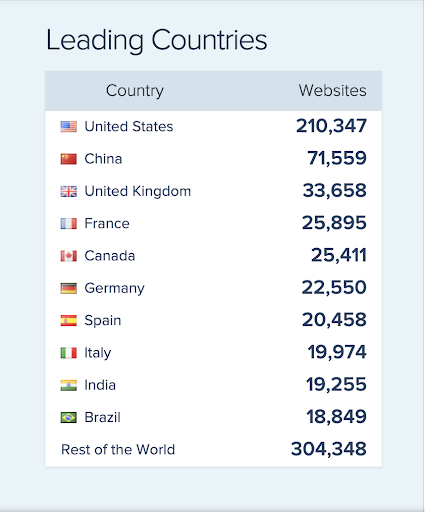 Components are one of the essential features of React, which makes it so prominent. And the critical part of this is that they are reusable. This means that you only need to define a component once and use it multiple times.

The reusable components play a vital role in making the development process fast and increasing productivity. Because when you develop websites on a large scale, it will save your time and money. You will feel relaxed and relieved when you use the same components in multiple ways.

For example, let's suppose that we want to create a primary menu having two identical buttons. Let's begin by making one of these buttons. In a simplified version, it will look like this:

Thanks to the reusability above of once created components, we do not have to write this code twice to make the second button – paste MyButton in the element serving as the menu, as presented below.

It is highly appreciable of this reusability which was created just once. Now we do not require writing this code twice to create a second button. You need to paste MyButton in the component serving as the menu, just like below:

In short, the reusability components will help increase productivity by saving time and money because you need to work once and can implement that work many times in multiple ways.

We are happy with the fast rendering of React as compared to the other frameworks. React reduces the page load time and improves performance, thus ranking business first on the Google Search Engine Result Page.

React's popularity and usage is catching sparkle day by day for better results. React is indeed one of the excellent tools which help to create interactive applications for mobile, web, and other platforms.

Considering these key benefits and the demand for ReactJS, Many ReactJS development companies are into React web development. However, if you are also looking to take your business to the next level, do not stretch the time to hire a React development company.