Should I plan to move my Wordpress Website into the Latest Drupal version? | Blog | Innoraft Skip to main content 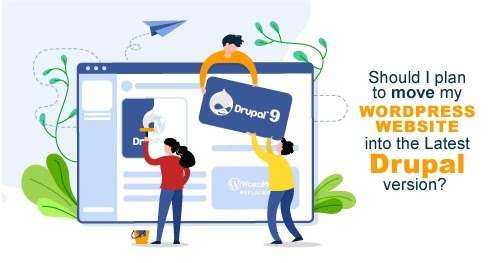 If you're here, I assume you already have a website built on WordPress but you're not satisfied with it, or perhaps you're here to have a clear idea about why you should give a thought to migrating your existing WordPress website to the latest version of Drupal.

Back in 2007, when we just started developing websites, Wordpress was the most adopted solution for sure! It was evolving from a blogging platform to a full-fledged content management system (CMS) and almost every website was built on it. Everybody was in love with this platform because it was simple and worked pretty well for both editors and developers.

As more technologies evolved, the tables turned for developers.  They had to meet demands for more content types, had to cater to more elegant and rich admin experiences, and that is when the developer community started asking for a more Enterprise Level CMS. And then Drupal happened which at the start was very elementary but promised a more robust and scalable CMS from day 1. Drupal’s functionality is more robust and strong than WordPress any day! Also, it is way more docile concerning  API development, and its default caching features are strong and out of the box. Apart from these, they adhere to imperative enterprise needs like high-end performance, have the best and neoteric SEO tendencies, have a deep taxonomy system, expanded extension control, just to cite a few! 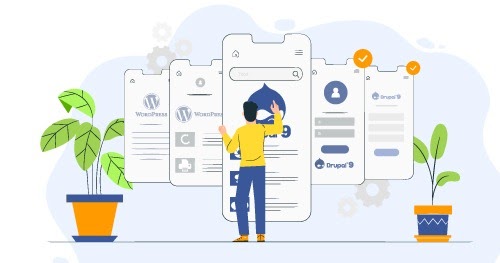 Drupal got the better of Wordpress: How and Why? Uncover the pointers here!

Drupal has wide functionality when compared to WordPress. It presents choices starting from picking a theme to building various stakeholders for the website. One can set up tasks for various people to handle the content, admin the site, or obtain specific information only. One thing that sets Drupal apart from others is security and modularity. These are its core principles. Besides, Drupal lines up with the most advanced PHP 7 standards like PSR-4 ,namespaces, and traits, and employs top notch external libraries like Composer,Guzzle, Zend Feed Component,  PHPUnit, Assetic, etc.

The flexibility of Drupal is just unmatched. Drupal themes can be customized which prevents one to stick with the same theme for a lifetime. Here you can add your personal touch and style to it. Moreover, they have modules similar to plugins in Wordpress. These modules are free and have enhanced functionality than that of WordPress. Drupal’s architecture allows you to build anything  a CMS possibly can. They utilize modules and extensions for configuration which in turn grants delicate detailing to make a site unusual and different.

Drupal is undoubtedly ideal for building complex sites. It has got the capability to hold thousands of pages and users. Updated and improved Drupal versions have come up to be even bigger and better. Moreover, Drupal utilizes PHP 7 and Symphony, these two are widely acclaimed to be the best when building bigger and complex sites. Also, big thanks to its easiness and scalability of joining with others making it the leader in this segment.

Drupal’s community is expansive and thus, celebrates the name of being the largest open-source community.  This community does not comprise ordinary heads but is a place full of enthusiastic, resourceful and skilled Druplers who have simply devoted their life towards making Drupal the best CMS. Therefore, keep on coming up with new features time and again. If you’ve a Drupal related query, it won’t be troublesome to get the answer for the same, as experienced Druplers from across the globe are there to help you even with the most obscure of questions and development woes.

New versions and updates every now and then

For non-developers, the new version has proved to be killing it. It is considered to be very easy. On top of that, the community is making every effort to improve the software. Like this, it will be utilized by more and more people than just the community. It is no less than a path for the not-so-very tech-savvy individuals to learn and build a website on their own.

Security has been the biggest differentiating factor between Drupal and Wordpress. The security that Drupal confers is considered unparalleled to not just Wordpress but to other major celebrated CMS platforms too. It renders enterprise-level security and extended security reports. This one factor keeps Drupal race ahead of its competitors and this software suitable for government projects.

Fast performance is yet another compulsory and strong differentiating factor that immensely favors Drupal when it comes to a Drupal Vs Wordpress battle. Drupal.

SEO and Drupal simply go hand in hand. This is because it has plenty of tools for upgrading to SEO. Drupal has a lot to offer. It has got a plethora of out-of the box traits that are of immense help and are SEO compliant. These features help websites to have a higher rank in search engines.

In this era, there is no single individual who uses just one device for Internet access. This is where Drupal supports developing websites out-of-box that operate properly on both a PC and a mobile device.

The other feature of Drupal that will make you fall for it is that it renders an opportunity to maintain your website without the guidance of web developers. This feature is like a cherry on the cake. Apart from that, Drupal has “bricks” which you can relocate and rearrange for working with content without destroying the site.

With the passage of time, Drupal is just getting better and better. The last major updated version of Drupal i.e; Drupal 8 is still improving and is breathing innovation every day. Drupal 9, the much-awaited and talked about version of drupal is on the verge of making public in June 2020.

Now, you must be reflecting on what should you be expecting in store for you if you choose Drupal for building or migrating your website?

First things first, Drupal has an amazing tool for migration from any CMSs or different sources. This tool enables us to initiate migrating much more comfortably and at competitive prices to boot.

The second point is that the contributed modules serve perfectly, and there are over 4,000 modules in development. These modules come in handy to all the Drupalists to work easier, faster, and better.

The third one is the site-building. It is very easy with Drupal. Drupal can be downloaded for free and helps build a website with rich functionality utilizing modules. Content can be corrected without bringing down the site, and the best part is if unfortunately, something turns wrong the Drupal community can instantly help you sort it out.

Last but not the least, Drupal is more compliant as it utilizes Javascript technologies. Presently Node.js, React.js, Vue.js, and Angular has also become accessible for Drupal web developers which is amazing news.

Now, updating and maintaining a site is going to be a no-brainer. There is a chance of scaling, and above all, it's straightforward to work and fill with content.

MFeatures that Drupal 9 is going to bring to existence:

That said, If you were probing for an answer to the question “Should I plan to move my Wordpress into the lastest Drupal 9?” The answer to this is here. Look, there is a never-ending battle among various CMS’s. Drupal and Wordpress are tough competitors for each other. Both are doing well in this sphere but somewhere the advantages of Drupal (and especially Drupal 9) overpowers Wordpress.

The choice is yours. Today, there is an option to migrate to something robust which will have long-term support for at least the next 3-4 years. And if you are thinking of your website as a weapon for you to increase your revenue, I think the time is apt to go for it.

If you need a discussion on some other pointers, we are here to help. And if you have decided, let us know and we will be happy to assist you in your migration to Drupal 9.

Mobile app development is not rocket science in today's day and age.