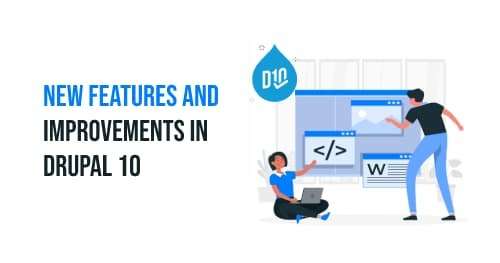 "Is anything new on the way?" It is among the most frequently asked questions about technology and software, such as what's new in computers, mobile applications, or digital environments. Now that Drupal 10 has been released, everyone is curious about what's new. We're excited to walk you through what this update has to offer, whether you're an experienced Drupalist or new to the Drupal world.

If you're developing a site with a content management system, Drupal CMS is very flexible compared to other CMS. As a result, Drupal is highly effective and can be used to develop large, complex websites. It is a PHP-based template that allows non-technical users to add and edit content without any knowledge of HTML or Web design. Using Drupal CMS, connecting with other sites or technologies is simple, as Drupal can manage complex forms and workflows.

Why Drupal Instead of Other CMSs?

The first decision you must make when starting your online business is choosing the proper CMS. You won't go very far without it. There are many other CMSs, but Drupal CMS is the most useful and promising. Drupal currently powers over 14% of the top 10,000 websites on the internet. Owing to its large community of dedicated developers, it is a robust CMS with a record of rapid innovation.

Some of the Drupal capabilities include:

Drupal can create a wide range of websites, including blogs, business or personal websites, portals, forums, e-commerce sites, intranets, social media sites, portfolio websites, and many more. Drupal has all the tools you need to get the job done, regardless of the type of website you want to develop.

An experienced Drupal development company understands how important it is to keep your Drupal-powered project running correctly. Therefore, they will continuously work on your Drupal project, keeping you free to focus entirely on your business objectives.

The speed of Drupal CMS development is increasing. As a result, there are opportunities to expand and develop your site because new features are being added to the various upcoming releases. In addition, understanding the Drupal release cycles will help you plan the time and resources needed to keep your Drupal site secure and updated if you're maintaining one.

Many years ago, Drupal 6's support ended, and it was no longer in use. Nevertheless, it was a significant release for Drupal, and many government agencies started utilizing it. One of Drupal's most important milestones was the adoption of Drupal 6 as the CMS for the White House's official website in 2009. To maintain the stability and security of your website, you should look into other options if you are still using Drupal 6.

Drupal 7 was released in January 2011 and is still maintained, with a few updates given annually. In this series, Drupal 7.94, released in December 2022, is the most recent version. Support for this version is provided until November 2023, which is approaching fast.

Drupal 7 users are highly recommended to upgrade to Drupal 9 or Drupal 10. Drupal 7 won't receive any relevant feature updates. As soon as Drupal 10 is released in December 2022, you may begin developing the user experience, the content architecture, and other aspects.

With Drupal 8, Drupal changed from a content management system to a platform for digital experiences. This version has a new release cycle, backwards compatibility, views in the core, a layout builder, and more usability enhancements. Drupal 8 has now reached the end of its life cycle. Drupal 8 users are advised to upgrade to Drupal 9 or Drupal 10. There won't be any security patches or feature updates for Drupal 8.

The long-awaited Drupal CMS version 9 was released in June 2020. Drupal 9 roadmap was built primarily on top of Drupal 8, with deprecations and optional updated dependency support.

Drupal 9 has only two significant differences:

Aside from these two differences, Drupal 9.0 is identical to Drupal 8.9, the last Drupal 8 minor release. Maintaining the most recent version of Drupal 9 will allow you to seamlessly transition to Drupal 10 in the future. It would be beneficial to start automating processes by upgrading from Drupal 9 to 10.

The objective of the Drupal 10 initiative was to release the upgraded version as scheduled in 2022. Therefore, businesses must be given enough time to update their websites to the latest version.

Due to the development of third-party components like Composer, PHP, CKEditor, and Symfony, Drupal 10 is closely behind the Drupal 9 roadmap. The last significant migration was a simple process since Drupal 9 was developed within Drupal 8. The transition will be simple, as Drupal 10 is expected to be an enhanced version of Drupal 9.

We can assist you in migrating to the most recent version of Drupal CMS. As a Drupal-focused company, Innoraft has ample experience developing technically sound, future-proof solutions that extensively use the CMS's functionality.

Once Drupal 10 goes live, it will be equivalent to the recent version of Drupal 9. However, it will include updated dependencies and the removal of deprecations. There will be many new Drupal features in version 10. Significant changes will be made to the appearance of the front end and the back end. New users will find it easier to use Drupal's newest version. It will have a modern appearance, be simpler to operate, and still have excellent functionality.

So, let's explore some Drupal 10 features that will help us have a better experience.

Drupal Claro is the new administration theme built on Drupal's new design system. It's a copy of the Seven admin theme, which has been the default admin theme in Drupal since Drupal 7. The Drupal Claro theme will replace the Seven theme, designed in 2009 for Drupal 7 and moderately updated in Drupal 8, which was obstructing new users by giving the appearance of an out-of-date system. Instead, Drupal 10 has been developed following the most recent standards and adapted to utilize the latest versions of this CMS.

The Claro theme was developed under the Admin UI and JavaScript Modernization Initiative to make Drupal compatible with decoupled applications and make end-user navigation easier.

Unlike previous Drupal core themes, it has a clever dropdown menu system that prevents menu items from disappearing beyond the browser's edges. Furthermore, design elements such as shadows and gradients are used lightly, and the text, animation, and color palettes are carefully chosen.

In 2023, CKEditor 4 will no longer be supported, so we're moving to CKEditor 5. It offers a sophisticated content editing interface on the front end. For instance, you no longer need to open multiple dialogue boxes to edit links and images.

The ability to paste text from Word or Google Docs into the content editor has been improved in CKEditor 5. It will eliminate copied markup from those applications. CKEditor 5 is more customized to content editors' requirements than site builders. Because of its user-friendliness and great UX, CKEditor is great for site builders and an excellent framework for developers to customize and build upon.

Drupal relies mainly on the Symfony framework. It has been the main factor in Drupal since version 8. However, the Drupal 9 roadmap depends on Symfony version 4, which will end its support in November 2022. So you might expect some new features considering that upgrading the Symfony PHP platform is why we need to migrate from Drupal 9 to 10.

Symfony 6 removes a lot of deprecated code. However, it implies that we must update our Drupal core modules and themes that use out-of-date Symfony APIs. Once completed, sites will benefit from the most recent PHP and Symfony enhancements and can be expected to operate better, providing a faster experience to our users.

With the adoption of a new starter kit theme, Drupal 10 will make the development of custom themes easier. Developers were using the Classy theme to meet sub-theming requirements. The new starter kit solution will act as a theme to be copied when creating a new theme, rather than a base theme to be a subtheme. It will make it possible for front-end developers to obtain a copy to use as the basis for their theme.

It's essential to understand that the production themes won't change due to the starter kit changes. It will be easier to keep up. Classy will no longer be supported with the emergence of the new tool as it will be deprecated.

Drupal 10 allows developers and site builders to automatically enable secure and simple updates. Like many other platforms, Drupal newest version can now address the risks and issues associated with automated updates. The Automatic Updates Initiative has completed substantial work in user experience enhancements, package deal signing for advanced security, and testing with various host providers. As a result, it is more appropriate for SME site owners than large enterprises with custom-built workflows.

The Project Browser initiative is another way Drupal looks out for small business users. Finding Drupal modules and themes is simple for website builders using Project Browser. When a project is chosen, details on how to install the extension on your website are given. Therefore, the Project Browser's goal is to make adding new modules to a project simpler. Consequently, we expect significant modifications to this module soon.

Since Drupal Rector was previously available when Drupal 9 was released, we include it here because the tool has improved. It searches for deprecated methods, classes, and other parts of PHP code and replaces them with new versions. Most of the changes required to migrate your custom modules to Drupal 10 will be generated automatically by Drupal Rector. The tool significantly reduces upgrade time and costs, removes the need for repetitive tasks, and simplifies the upgrade process.

Drupal is getting rid of jQuery. jQuery was a front-end developer's best friend for a long time. However, jQuery is no longer required since its features are formed in Javascript. The removal of jQuery from Drupal 10 is still in progress.

Some of the progress includes:

Other than removing plugins, there are particular challenges we must overcome, foremost among them being the replacement of jQuery's event handling and AJAX functionality with simple javascript. Most importantly, it is now possible in Drupal 10 to disable jQuery loading for anonymous visitors to your site. As a result, removing jQuery from editors and site builders may take more time.

The upgrade to PHP 8.1 is significant because it will enable Drupal 10 to use tools for improved performance and continued growth. In addition, because PHP 8.1 is a major revision to the PHP language, developers will appreciate new features such as enums, first-class callable syntax, read-only properties, intersection types, fibers, performance improvements, and more.

You now understand how to prepare for the release of Drupal 10 and what to expect from this new Drupal version. The Drupal 10 readiness initiative and drupal.org are additional resources you may find helpful as you prepare for this upgrade.

The easiest way to get ready for Drupal 10 is to stay informed. Now that Drupal CMS has adapted to a flexible update schedule and more straightforward migration procedures, businesses are less likely to hesitate to make that transition. In addition, Drupal CMS provides the cost savings and flexibility of a free and open-source approach, expands naturally at the speed of the web, and allows you to connect content across various platforms and campaigns.

Regular website updates give us security, business continuity, and the potential to avoid a significant amount of work if we migrate to the latest Drupal version. So begin today to unlock the power of Drupal for your organization!