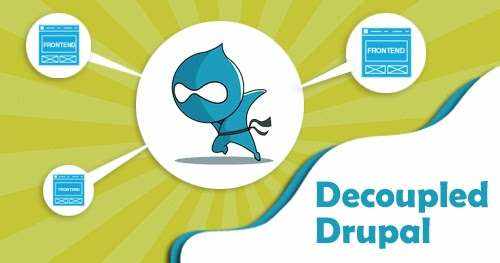 The Ultimate Guide to Headless/Decoupled Drupal

Decoupled Drupal is the new innovation. Companies are going gaga over it. The reasons for the above are multiple. Decoupled Drupal renders excellent opportunities to create omnichannel, enticing, flexible and interactive applications which is a pressing priority in 2020! It is great to see that Drupal ultimately leaped with planning an API first CMS and uniting JSON: API to the core.

Wearables, conversational interfaces, IoT and more have begun to establish their presence in the digital marketplace making changes on how we experience the internet, which insists we evolve and develop for the web. Therefore, the only way to keep up with the pace and evolve is by utilizing fast-moving and profitable front-end technologies like AngularJS, React JS, etc. that can present your content at an application-like speed. One such approach or say the strategy is Headless Drupal (or decoupled Drupal)  that is gaining ground and is being considered a holy-grail because of its innovative strength to produce exceptional digital experiences.

What is Headless Drupal?

Definition of decoupled Drupal by Acquia:

"Decoupled Drupal (or headless Drupal) allows the developer to utilize any technology to render the front-end experience in place of the theming and presentation layers in Drupal. This process utilizes Drupal as a content service. The Drupal back end exposes content to other systems, such as native applications, JavaScript applications, and IoT devices.”

Companies are widely adopting the headless approach to Drupal. Here's why?

Gone are the days where brands used to interact with their consumers only through the website. Now they do it via multiple channels. Now you know that CMS is not used only to send content to web browsers but promotes content to numerous other places.
Therefore, Drupal is ideally positioned to be the reservoir of content for numerous consumers. Besides providing content for a frontend website, decoupled Drupal can confer content via an API to be used by various mediums, such as:

At times, there are demands by companies to create multiple separated websites but with the ability to share a lot of content.
In such cases, Drupal comes as a savior as it can create one content engine which will transfer content to all the microsites. The microsites can be instantly built and shut whenever there's a need to do so.

Drupal is composed in a server-side rendering engine i.e; PHP. To build a website that insists upon a very detailed UI or simply wants it to be very interactive, it has to be made on javascript.
So, if you aspire to develop an interactive web application with fantastic UI, coupling drupal with a frontend Javascript framework is certainly the way to go.

Druplers with great expertise and qualities are difficult to find. To move faster what a lot of companies do is that they decide to build the backend in Drupal and hand over the frontend to a team trained and specialized in a different technology, in which one can acquire more skills and is also simpler to learn.
The added advantage of requesting diverse teams to work on one project is yielding the best methods from different sources. More often this yields better results as now you don't rely on a single team to develop the backend and frontend.

There are many websites, which desire to secure a fresh, contemporary look and hence, redesign their website every few years. This is where decoupled Drupal helps! In a decoupled drupal the frontend is separated from the backend which makes it much easier to rebuild. Revamping of the back-end can be done without having to remodel your front- end.

Drupal is great for headless

When speaking of a headless CMS, the first thing that strikes the mind is Drupal. This is because Drupal has a maximum of the functionalities that are the need of the hour. Also, it is considered to be one of the most mature CMSes and has incredible APIs.

The APIs can be utilized by a large number of different consumers without bothering much about the frontend. The API is documented and makes third-party or other project integrations
much easier and efficient.

The approach of progressively decoupling is more like a regular Drupal setup, where the primary call to the server is managed by Drupal and the pages followed are gathered by Drupal. On the page, we fix interactive elements made in javascript, which then retrieves data it lacks by requesting a REST API also rendered by Drupal.

Fully decoupled Drupal indicates an entire division from the user interface and the CMS in the backend. This reflects that Drupal is nothing but a data supplier to a JavaScript application made up of a framework like React. The frontend is completely accountable for the markup of data presented by Drupal and it’s web services. If you're a developer who aspires to have great control over the frontend this is the most sought-after option for you.

Points to be taken into consideration before going fully Decoupled

As we know there are two components (front -end, and back-end) in a headless drupal that has to be developed in coordination. This often calls for separate teams of developers to adjust and communicate as data models have to be agreed, endpoints have to be built and examined by both development teams. Managing all of it at times is very difficult and requires a lot of extensive effort.

The overall development cost for this is comparatively high as here two systems have to be built. Apart from this, the subsequent maintenance cost is also pretty high as maintenance is considered a difficult process. Tests are done to rely on REST APIs because modifications to one system might not fit the other.

If a website heavily depends on traffic from search engines, a decoupled strategy might not be the ideal solution.

Loss of some Drupal functionalities

When you opt for decoupled Drupal, you will have to let go some of the top (and free) functionalities that come along with the Drupal theme layer such as the block arrangements, design, and display management, content previews, localization of UI, security traits like cross-site scripting (XSS), etc. Some of these cannot be repeated for a client-side framework. 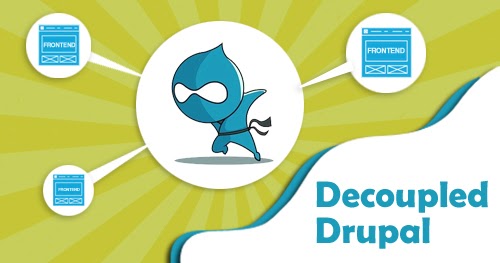 How do we Decouple?

Various frameworks and programming languages in which front-end can be easily built and are mostly built are as follows:

Multiple picks in which back-end can be built or are mostly built:

Having said that, Headless Drupal is an exciting approach and is certainly the way to go. From creating feature-rich interactive websites to creating content hubs that power different content consuming websites and media, decoupled Drupal does it all!

However, there are certain minute downsides to it as well, however, certified web development agencies assure careful deliberation before taking the decoupled path and they will also help you have a clear picture of the same.

I am hoping this article will solve all your apprehensions and doubts by providing pieces of information that you were seeking for a good while regarding headless/decoupled Drupal. For any further query you can always reach out to us and we will happily advise you on your drupal project.

Websites are increasingly becoming an essential marketing tool for businesses. It helps companies reach out to a more influential audience at a relatively lower cost and enhance conversion rates.

What are the Various Phases in Mobile App Development Process?

Are you willing to develop a mobile app for your business? This article describes various phases in mobile application development process. Read it for more information.

Upgrade Your Drupal 8 Site to Drupal 9

With Drupal 8 reaching its end-of-life on Nov 2, 2021, you must upgrade to Drupal 9 before November to keep your site secure.